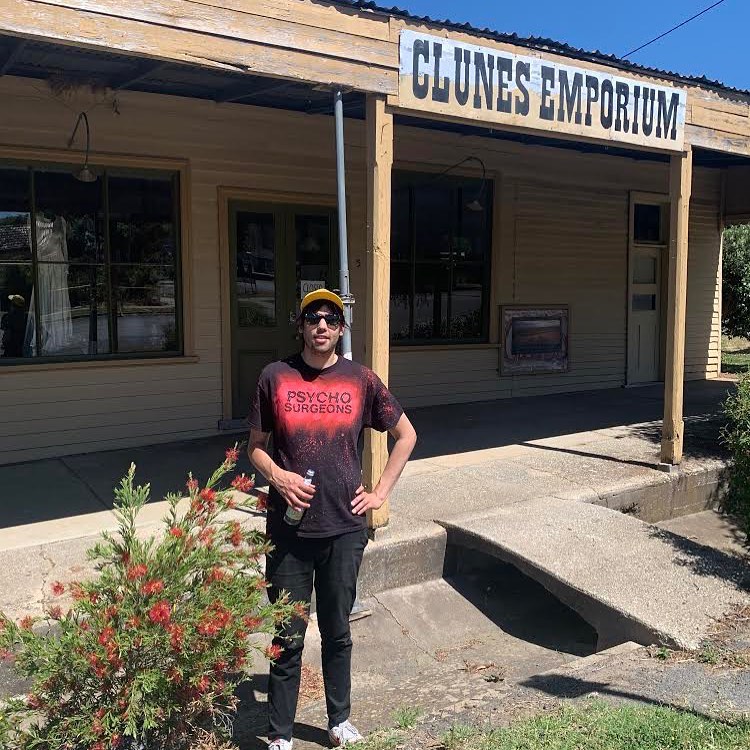 EN: Alien Nosejob is one of the most captivating UFOs of the Australian scene. His albums rain down like meteorites in Meteor Apocalypse. His music is sometimes garage punk, sometimes glam, always explorative. Here is one of the artists of the year 2021, to infinity and beyond!

Let us start with a playlist curated

Alien Nosejob for Still in Rock

Gday Mate! I’ve been pretty good lately, considering the earth has tried to shake us off like a bad case of fleas! I’ve just been posted up in my room recording, going for walks along the creek and working with my buddies in a local warehouse called Soundmerch.

Good to hear! Now, sorry for asking such a basic question, but… the band’s name, where does it come from?

It’s one of the movies that Troy McClure of the Simpsons starred in. The first album was almost called Leper in the backfields!

What was your intention when you created the band? Has it evolved over time?

Early on, the intention was to just do an EP and an album (all recorded in one day by Billy Gardner). But I couldn’t help myself. It’s turned into a ‘do whatever I want’ project. Genre is irrelevant. No Trend…etc. if I know myself like I think I know myself, that idea will eat itself and it will (or already has?) grow stale and I’ll just start making garage / punk again.

If you had to summarize Alien Nosejob in just one sentence, what would it be?

Burning out and fading away at the same time.

It seems to me that you are moving away from “garage” music. “Television Sets” was raw, when Paint It Clear is more texturized. What do you think? Is that intentional?

Nothing I do is really intentional. TV sets was definitely written at the height of my annual, month-long Ramones worship. Paint it Clear was written over a few years, so the influences varied. A chunk of the songs are influenced by UK new wave/post punk. I didn’t write it as ‘an album’, I wrote them all as songs and edited it all together to sound like an album. Sometimes I wish I had the focus to concentrate on one sound at a time, but I don’t. I’m part of the microwave generation. I want 3 meals in 3 minutes, or I’m not eating.

The microwave generation, I like that! Despite the Ramones, is it fair to say that you are inspired by the last seventies/early eighties? “Leather Gunn” reminds me of glam rock music, for instance.

Yeah, of course! I’m very inspired by that era. Leather Gunn in its original demo, I was trying to mix Motörhead and Duane Eddy together. The end result definitely doesn’t sound like that though, haha. I love glam rock, so I’m glad that it’s reminiscent of that for you.

How did you end up working with Anti Fade Records? The label is killing it!

Billy (from Anti Fade) is one of my best friends. I met him in 2009. We’ve played in several bands together, travelled the world together and work together. Outside of my parents, I’d say I’ve spent more time with him than anybody else.

Oh, excellent. Say hi to him then. Now, where do you want to take Alien Nosejob? Which kind of music will you make in 5 years?

I don’t know. I don’t have a 5 year plan. Hopefully, I’ll find some new sounds that interest me by then. Christian Rock?

I guess I am, by default. I don’t really know. Perhaps Australia doesn’t work in the same way as other parts of the worlds. I’m friends with, and play shows with lots of different bands/artists from lots of different circles, doesn’t matter what type of music they like.

Well, speaking about which, Melbourne scene is arguably the world’s best in 2021. Does it feel like that from the inside (or, almost the inside, Melton is right next to it)?

A lot of creatives move to Melbourne when they finish school. It’s what I did and what the majority of my friends did. I know very few people that grew up here. I guess you’d find similar situations in cities all over the world. Artsy Fartsy types always seem to stick together. I’m unsure if it needs a comparison to any other place. One difference I’ve noticed is that people here seem into lots of different genres.. not just like punks listening to punk, techno geeks listening to techno..etc. it’s totally fine to play in a punk band and have a folk thing going on at the same time. Maybe it’s the same elsewhere, just not in my experience.

No, never seen that too much over here. You’ve been around for quite some time now. What would you like to change in the music sphere?

I love seeing new people play music. People that haven’t played music before, giving it a shot. I love it when music people try unconventional things. It’s the aforementioned people who generally have my favourite style. As I’ve got older, I’ve noticed less music snobs and it’s been a great change.

What is your favorite album of the last few months?

I love the Power Supply album, the new Exek album and the Glass picture tape. Big fan of the band Electric Chair too.

I’m not sure! I’m not a very argumentative person. When I am, I usually find myself eating my own words a year later.

That’s a hard one. More so than moments, it’s more just the people you meet. It’s like “woooah, you grew up on the other side of the world as me; we get on as if we’re both 12 and we might not ever see each other again!” I miss silly tour games trio… who can eat the grossest thing / Celebrity heads / make up a rap off the spot / make up funny acronyms of the license plate in front of you. Just dumb stuff.

I miss being dumb too… And when can we expect some new music from you? Is there any plan for a new LP?

I’ve recorded a new one 🙂 Should be out at the end of the year, hopefully.

Oh, wow! One movie I should watch?

No. Like every other genre, it never will. Some people just got bored with it for a bit.